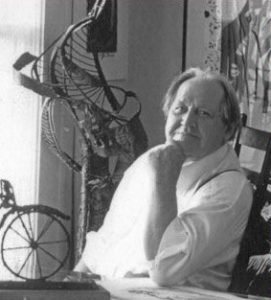 Steffen Thomas was born in 1906 in Fürth, Germany. His father, a paintbrush manufacturer, apprenticed him to a stonecutter at the age of 14 after realizing his son wanted to be a sculptor. Steffen applied himself and became an excellent stone carver, spending part of his time working on WWI monuments. He was so gifted that at the age of 17 he was accepted to the School of Applied Arts in Nuremberg and at the age of 19 entered the Academy of Fine Arts in Munich. While at the Academy he established himself as a sculptor of note, was given a studio of his own and awarded “Master” status at the age of 21.

Steffen was infatuated with the American Dream, and at the age of 22 paid his own way to the United States, finding a job in Palm Beach, Florida. There, he made copies of classical sculptures for the E.F. Hutton Estate, until he got bored and started to add his own embellishments. As a result, he was fired on the spot. After a brief trip to Germany, he returned to America. He lived for a short time in Alabama but settled in Atlanta by 1930. The “Young Bavarian Sculptor” soon became well known and was commissioned to sculpt busts of Southern dignitaries, such as Alabama Governor Bibb Graves and Dr. George Denny, President of the University of Alabama. By 1931, he converted an outbuilding into a studio behind the Studio Arts Assembly at the corner of Peachtree and 14th Street, where he continued to work for 10 years.

As an attractive, eligible Atlanta bachelor in 1933, Steffen courted the very southern belle Sara Douglass for six short weeks before he asked her to marry him. She promptly said “yes” and they were married that very day in the Fulton County Courthouse, where an Atlanta Journal photographer snapped them as they came out of the building. He became an American citizen in 1935 and continued his work as a sculptor, supporting his new family by creating busts of famous Americans, including the noted scientist George Washington Carver and Dr. Crawford Long.

In 1941, Steffen bought 50 acres in Stone Mountain, Georgia, where he and his wife raised their four children in a home he built himself–stone by stone. Here, he worked in his studio equipped with a bronze-casting foundry he again built himself. Thomas created some of his greatest public sculptures in the Stone Mountain studio, including the colossal statue of Governor Eugene Talmadge, on the grounds of the Georgia State Capitol in Atlanta, and the Alabama Memorial, located in the Vicksburg National Military Park in Mississippi. Thomas continued to accept commissions until 1955. Finally able to follow his muse, Steffen created the type of Expressionist art that is represented in the Steffen Thomas Museum of Art until he passed away in 1990. 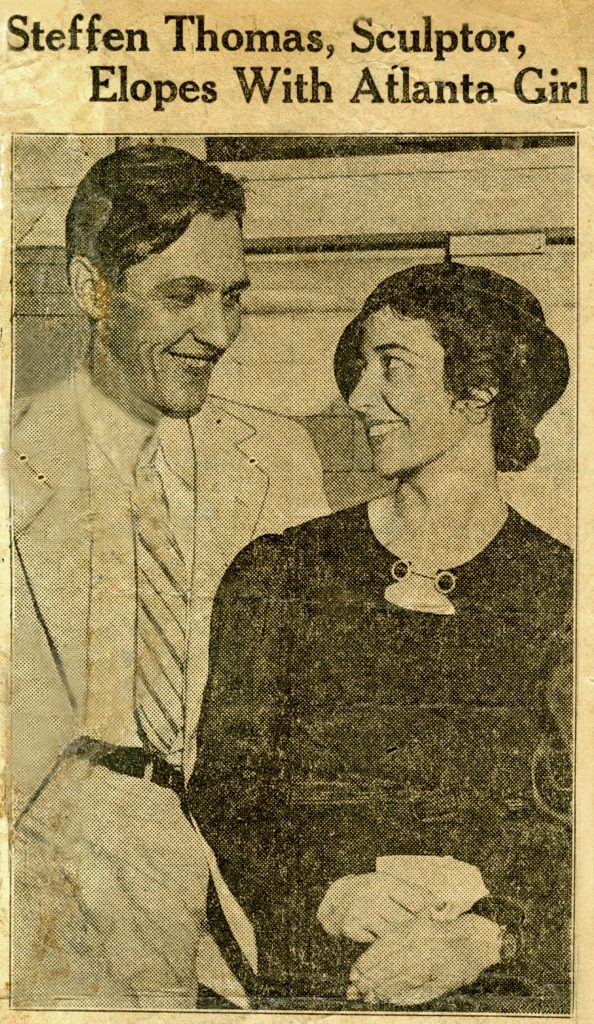 Sara and Steffen Thomas are pictured on their wedding day. This headline originally ran in the Atlanta Journal and Constitution.

Thomas idealized women] “…are allied to the classical tradition stretching back to ancient Greece, without being specifically classical in appearance. On the contrary, they have a rounded softness suggestive of Matisse, but with an abstractness that arose from Thomas’s youthful Cubist experiments…In their many guises they express an ideal not simply of femininity but of humanity as a whole.”

Thomas’s work is highly individual. Of course, it has a playful side. Moreover, he was a keen observer of people, witness his portraits, which capture the character of each sitter remarkably well, and of the world, as the watercolors from his 1972 European trip demonstrate. But for the most part it was guided by his inner vision, so that he had little need for the live model.”

Thomas was a relentless worker. Not happy unless he was making something, his vast output and ceaseless experimentation with every available medium are his work’s most characteristic aspects. Nevertheless, tradition played an important part in his work, and as an artist born and trained in Europe in the early twentieth century, many different styles were natural to him.

Janson stated that, “Thomas was a whole-hearted Expressionist, not simply in technique but by temperament. His allegiance was to its underlying approach, which provided a suitable arena for his ample personality. Style was secondary to him. Like technique, it was a means of expression, not an end in itself. For that reason, he was free to change either the style or the technique to suit the requirements of the work at hand…”

There is a consistent artistic personality in Thomas’s work, even though his output is extremely varied. It shows an endless fascination with the possibilities to be explored in different media, a counterpart to his innate curiosity. Given his personality, in fact, he could not have been anything but an Expressionist. It was the perfect vehicle for his impulsive creativity. As with all Expressionists, his work rested on a high level of inspiration, and Thomas believed unequivocally in the rightness of his path. 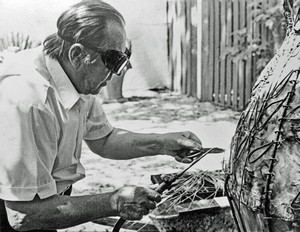 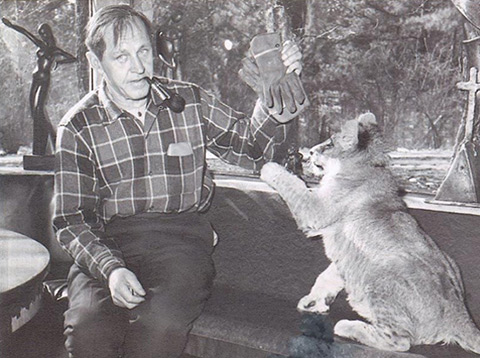 Steffen with Dick the lion 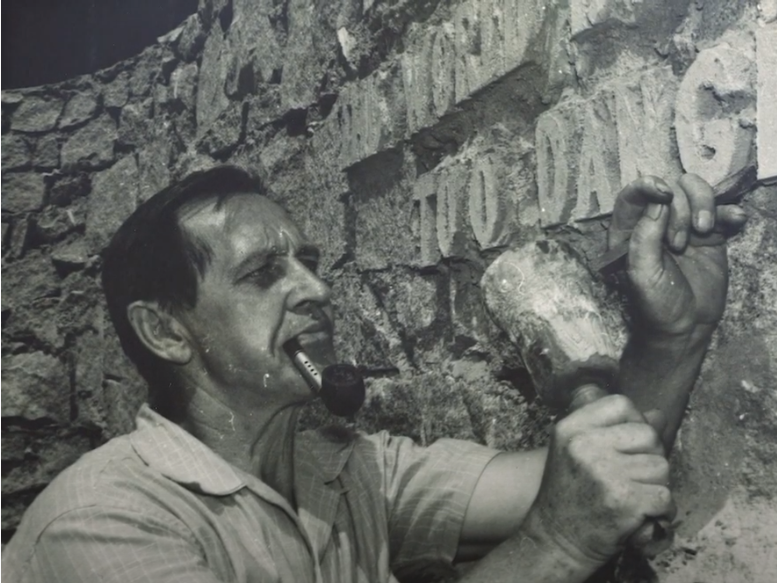 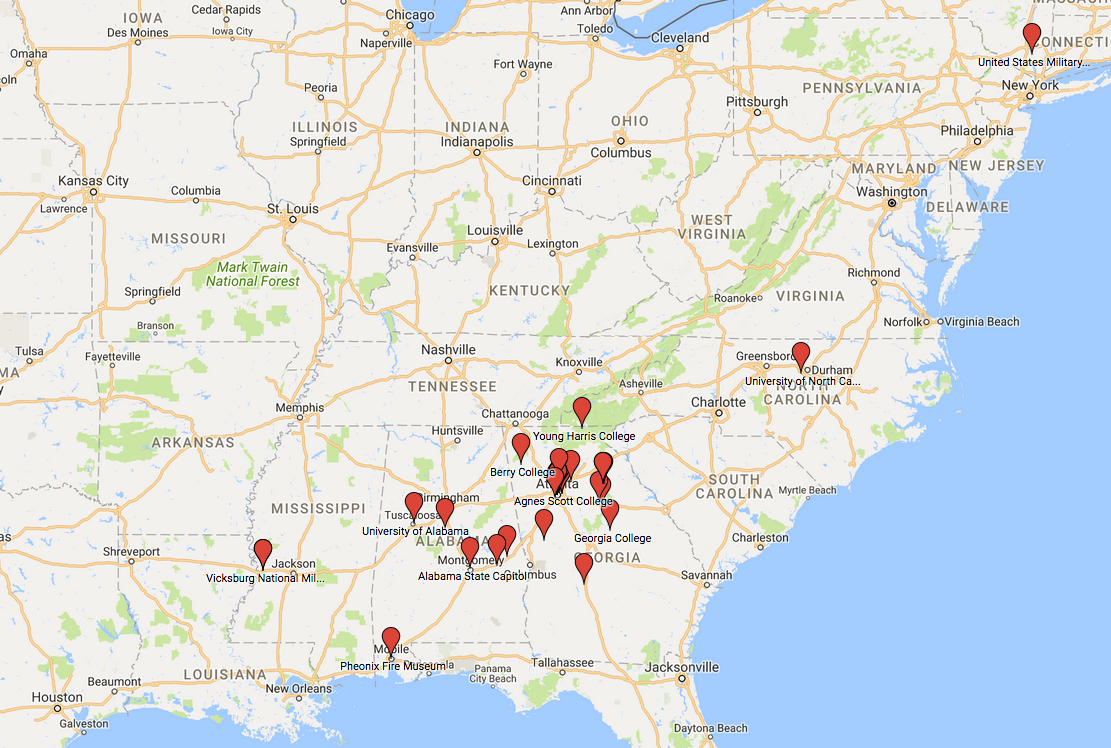